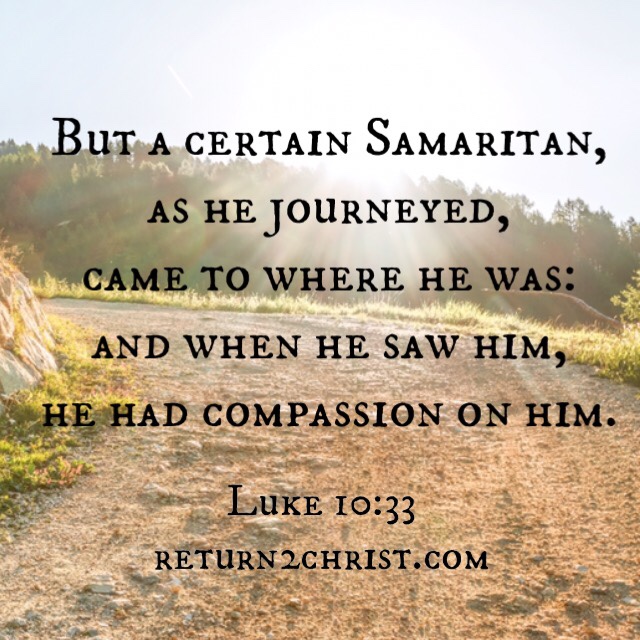 There was a man that was traveling from Jerusalem to Jericho. On his journey he was attacked by thieves. They stripped him, wounded him, and left him for dead.

A priest soon walked down the same path where the wounded man was. As soon as he saw the man that was in need of help, he ignored him and crossed the road. He passed by on the other side.

A Levite that was traveling along the same path did exactly as the priest did- avoided the man in need and crossed to the other side of the road.

Can you imagine the pain of the wounded man? Not only did he experience physical pain, but mental and emotional anguish. Was there not anyone that would help him in his time of need?

Fortunately, a certain Samaritan was traveling by, saw the wounded man, and stopped. The Samaritan had compassion for the man- and instead of running away at the sight of him, approached him in kindness and mercy.

The Samaritan bound up his wounds- set him on his own beast, brought him to an inn, and took care of him.

Not only did the Samaritan pay for the wounded man to stay at the inn, he also told the innkeeper that if any more payment was needed, that he would repay him.

When we come across those in unfortunate circumstances- may we not ignore them and their cries for help. May we help our neighbors just as the Good Samaritan did- with open hearts and minds. We can show God’s goodness and mercy to our neighbors- just as God has shown it to us.